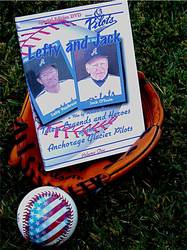 The way the Anchorage Glacier Pilots ballplayers must have figured it, nothing says love like, well, a little love. In any event, they pooled their money one August to give coach Jack O'Toole a special new friend as a birthday gift.

O'Toole's birthday coincided with the Glacier Pilots' participation in the annual National Baseball Congress World Series n Wichita, Kan. He was fresh out of the shower in his Wichita hotel room when he heard a knock on his door. He wrapped a towel around himself and opened the door to find an attractive young woman standing there.

O'Toole quickly deduced that the woman was a Wichita working girl sent by the players.

Ever the gentleman, O'Toole got dressed and took the woman to dinner, but only after he paraded down the hotel hallway with her on his arm and the grinning players looking on from the doorways of their rooms.

Another year in Wichita, Pilots pitching coach Lefty Van Brunt vowed to throw O'Toole a birthday party, complete with dancing girls, and he delivered on his promise.

"Who were they, Jack?'' Van Brunt said to O'Toole as the two swapped stories four years ago.

"My daughter, my wife and my mother,'' O'Toole answered.

Those are just two of the amusing, and occasionally ribald, stories told by the late O'Toole -- who died at age 80 in 2002 -- and Van Brunt in filmmaker Robert Barr's engaging new documentary, "Lefty and Jack.''

The limited-edition film -- only 150 copies are available -- is subtitled, "Alaskan Baseball Stories -- Tales, Legends and Heroes of the Anchorage Glacier Pilots.'' It is the first of Barr's planned three volumes about the Alaska Baseball League team that has played here since 1969, and for anyone who has followed the team or the ABL for very long, it is a gem.
"It's a video strictly for the fans,'' said Barr, 36, who grew up in Muldoon and now works in California as a filmmaker and a consultant to the DVD industry.

​Barr, who as a kid chased foul balls at Mulcahy Stadium, was enjoying a Pilots game with his dad, Howard, on a visit in 1999, when he mused that it was amazing no one had ever produced a documentary about the Pilots. So what's stopping you, Howard asked.

"He gave me one of those put-up or shut-up moments,'' Barr said.

So it was that Barr (Bartlett High, '86) came back up in the summer of 2001 and spent the summer shadowing the Pilots, shooting dozens upon dozens of hours of video. When he decided to interview longtime coaches O'Toole and Van Brunt, Barr quickly realized he had struck gold.

"To me, it was one of the divine moments when everything came together,'' Barr said over his cell phone the other day while negotiating Los Angeles freeway traffic. "It's just so much fun listening to them.''

In the video that runs 49 minutes -- that was simply luck, Barr said, not a nod to Alaska's status as the 49th state -- O'Toole and Van Brunt recall great games and great characters from more than 30 years with the Pilots. The organization has groomed scores of players for Major League Baseball, won five NBC championships and furnished countless stories so gripping or hilarious that O'Toole and Van Brunt could make time fly during a rain delay just by recounting the tales.

O'Toole recalls a classic game in 1982, when Pilots slugger Mark McGwire hit a mammoth, walk-off solo homer with one out in the ninth inning to end a no-hitter by right-hander Don August of the Anchorage Bucs and deliver a 1-0 win. Few remember that Pilots right-hander John Hoover struck out 16 and allowed just two hits.

Then there was the time in 1984 that the Pilots traveled to Fairbanks to play the Goldpanners. Randy Johnson, the 6-foot-11 southpaw who Pilots players called "The Giraffe'' long before he acquired his major league nickname of "The Big Unit,'' was scheduled to pitch the first game of the series. The team traveled by bus or motor home, but to cut travel time and give Johnson legroom, Van Brunt had the lefty ride shotgun in his Lincoln for the journey up the Parks Highway.

When Johnson stretched his bare feet out the passenger window, Van Brunt advised him to put on some socks. Johnson said he didn't have any, so Van Brunt dug a pair out of his suitcase.

"When we got (to Fairbanks), those socks were just covered with bugs,'' Van Brunt recalled. "I don't know what he would have done with bare feet. He wouldn't have been able to walk.''

The denizens of Home Brew Alley, the faithful rooting section next to the Pilots dugout at Mulcahy, are chronicled too. During the 1970s, a time when Anchorage still was a little rough around the edges, the gang in Home Brew Alley was particularly fun-loving.

"This didn't happen once, it happened a dozen times during the season,'' O'Toole said.

Another time, O'Toole said he was walking into the clubhouse after the Pilots won a game on Doug Ault's home run. A member of Home Brew Alley palmed something to O'Toole and told him to give it to Ault. O'Toole opened his hand to find a $100 bill.

The players in those days apparently weren't immune to living dangerously. O'Toole recalls one year when a few pitchers in the bullpen would leave the ballpark at the start of the game, go to a nearby bar and listen to the game on the radio to check whether they might be needed.

"If it looked like someone was going to be used, they'd get in the car and come back to the ballpark,'' O'Toole said.

Naturally, no dish from the diamond would be complete without stories about umpires, and "Lefty and Jack'' does not disappoint. Van Brunt said that in the Pilots' debut season of 1969, manager Paul Deese was ejected 19 times. Once angered, Van Brunt said, Deese was liable to throw anything he could get his hands on -- gloves, shin guards, a catcher's mask.

Then there was umpire Emmett Ashford. He was the first African-American umpire in the major leagues and later spent 1971 and 1972 umpiring in the ABL. Ashford stayed those summers at O'Toole's house, and O'Toole fed him steak and treated him to bourbon. One time, Ashford kicked O'Toole out of a game.

"Then I had to take him home, cook him steak and feed him booze,'' O'Toole said.

Barr plans to produce two more Pilots videos. The second volume will cover the Pilots' 2001 NBC championship season and the third will be a history of the Pilots.

For now, we have "Lefty and Jack.'' And it looks like the start of another Pilots classic.

This column is the opinion of Daily News assistant sports editor Doyle Woody. He can be reached at dwoody@adn.com.

The  program can be purchased at the Pilots website.