Fan photos and notes of yesterday. We encourage all Glacier Pilots and Alumni Players to submit photos, films, and videos to this growing collection of Anchorage Glacier Pilots baseball history. Help us preserve the Glacier Pilots colorful past playing baseball in the Last Frontier!
Please use the Contact and Links page or visit our Facebook page to submit. Thank you.

He was our Vin Scully. Lobdell was elected to the Alaska Broadcasters Association Hall of Fame in 1995, and he will be missed.
“Dick was a legend in terms of Alaska radio sports broadcasting, a character and a great human being, I so enjoyed listening to Dick do radio play-by-play – with that folksy style of his," said Tim McDiffitt, the University of Alaska Anchorage associate athletic director.  "He was a great story teller and could paint a picture with words so well that he even made those live-read ads interesting. I got to know Dick over the years as he did some basketball play-by-play for us here at UAA and later did public address for us. He had a great sense of humor and was kind and generous – one of those people you just wanted to spend time with. Alaska has lost an original and one of its best. My heart goes out to his family.”
Marcus Lewis, aka, Marcus in the Morning, radio host: “I remember what everybody else in our fantasy football league remembered most about Dick on draft day. He would always give the same lead in to picking some burned out player with “Mock me now, praise me later.” I would drive him crazy with calls during the week with pickups and drops not to mention last-minute lineup changers five minutes before pickups. I’m sure I am the reason he resigned as commissioner. He had the best laugh of anyone I know. To this day when I talk about fantasy football I refer to the Yukon League as Lobdell’s League. Miss him a lot.”

Kurt Haider, sports broadcaster: “I started in radio in Alaska in 1983 when John Davis hired me at KSRM in Soldotna/Kenai. It didn’t take long to learn that “the guy” in sports broadcasting in the state was Dick Lobdell. Listening to Anchorage stations when I had the opportunity to hear what Dick was famous for – delivering a story while still maintaining the play-by-play account of the game. Difficult to do with basketball and hockey, but he was able to do it, more manageable with football, but perfect for baseball, and that's where I feel Dick Lobdell made the biggest impression on me. Dick had the gift of making the listener feel comfortable, like he was telling the story directly to them, yet at the same time never making them feel like they were missing any part of the game. When I moved to Anchorage in 1996 to become the voice of UAA Seawolves basketball and hockey along with the morning show on KBYR, he was one of the first to contact me and offer his congratulations and whatever help I needed. Certainly a nice gesture, but that was Dick, a big man with a bigger heart.”

Jon Dyson, Glacier Pilots general manager: “He was a legend in every sense of the word. He had a passion for storytelling and a sense of humor to go along with it. He took great pride in getting information and crafting a radio broadcast that left you glued to the radio dial.”

Nate Sagan, UAA sports information director: "Dick had a silky smooth radio voice – one that really made it seem like you had a friend in your ear calling the game. He was extremely congenial and always made me feel comfortable despite my lack of experience back then. He was a true Alaska sports and radio legend, and I will miss his warmth and sense of humor as well.”

Van Williams, a 20-year local sports writer and the former sports editor of the Anchorage Daily News, writes about the athletic exploits of Alaskans for the Alaska Sports Hall of Fame. He can be reached at alaskasportshall@yahoo.com.
photos courtesy of Cecilia Lo﻿bd﻿ell 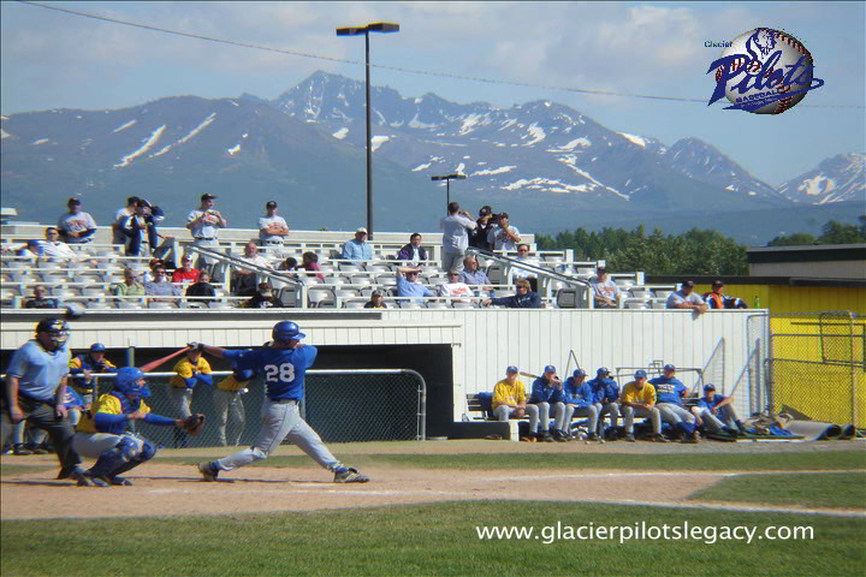